LRS has significant potential in clinical genomics, but this utility is yet to be sufficiently proven

DNA sequencing is the process of reading part or all of the DNA, or genome, of an organism. In humans, the genome is over 3 billion DNA base pairs – or letters – in length, and it is not possible to read the whole genome in one piece. To sequence the genome, DNA is first broken into smaller pieces that are each read separately. Bioinformatic techniques compare these short sequences to a reference sequence and piece together this data, like a puzzle, into a continuous sequence.

Comparing the DNA sequence to the reference allows identification of changes to the sequence, known as variants. While many variants are benign, some can play a role in disease. Therefore, sequencing is being used increasingly in clinical genomics to provide a range of tests to inform patient care.

Advances in clinical genomics have been enabled by short-read sequencing (SRS) technologies, where the DNA is broken into pieces up to 300 base pairs long. While these technologies have many advantages, they also have some limitations. There is growing evidence supporting the value of long-read sequencing (LRS) – where DNA is read in longer segments, typically greater than 10,000 base pairs – to overcome some of these challenges. LRS technologies also have several inherent advantages for DNA and RNA sequencing, including epigenetic sequencing and direct RNA sequencing. While there remain barriers to implementation of LRS as part of a clinical service, this technology presents unique opportunities over established genomics technologies.

The rapid development of SRS technologies has allowed ever-increasing volumes of high-quality sequencing data to be generated, in parallel with reduced sequencing costs. SRS technologies can be used to provide a wide range of tests from targeted panels through to whole genome sequencing. However, like a complex puzzle, assembling the genome from shorter pieces, known as reads, can be challenging. Many reads can look similar without additional context, for example, if a section of the genome is particularly repetitive.

Long-read sequencing (LRS) helps by producing data from much longer reads compared to SRS platforms. LRS typically generates read lengths of 10,000 – 100,000 base pairs compared to 75-300 base pair reads for SRS. Under specific conditions, sequence reads in excess of 4 million base pairs have been possible [1].

The process of putting sequence reads in the correct order is known as genome assembly (Figure 1). The advantages of longer reads are that they capture bigger sequences in the genome, are more distinct from each other, and simplify the process of reconstructing the original DNA sequence. For more complex regions of the genome, long reads provide more context, allowing the sequence to be reassembled with less ambiguity and error.

Figure 1. Mapping reads to the genome is a key step before any analysis can be done. Both short-reads and long-read sequencing produces data from fragments of nucleic acid and compares these reads to a reference sequence. Longer reads capture more information in one sequencing improving confidence during genome assembly [2].

Why do we care about long-reads?

The reference genome is the template against which sequencing data is compared to identify variants for analysis. Methods used to construct the reference genome have some limitations resulting in gaps and regions not completely resolved. LRS has been used in recent efforts to generate the first complete human reference genome to resolve these difficult to sequence regions in the genome [3].

Clinical genomics has historically prioritised interpretation – analysis of evidence for the role of a variant in disease – of small variants accurately detected using SRS. Small variants are defined as shorter than 50bp and include single nucleotide variants and small insertions or deletions. LRS is better at identifying larger (>50bp) and more complex types of variants missed or poorly characterised using SRS (Table 1).

Larger genomic variants have a bigger impact on the genome and are more likely to be disruptive, making them a priority in clinical genomics. For variant interpretation, this additional confidence from LRS helps to inform the precise nature of a variant and potential role in disease. Collectively, this will improve diagnostic yield in clinical genomics by expanding the range of variants included in analysis and improving overall detection.

Table 1. Summary of complex variants and how long-reads can improve detection and interpretation. 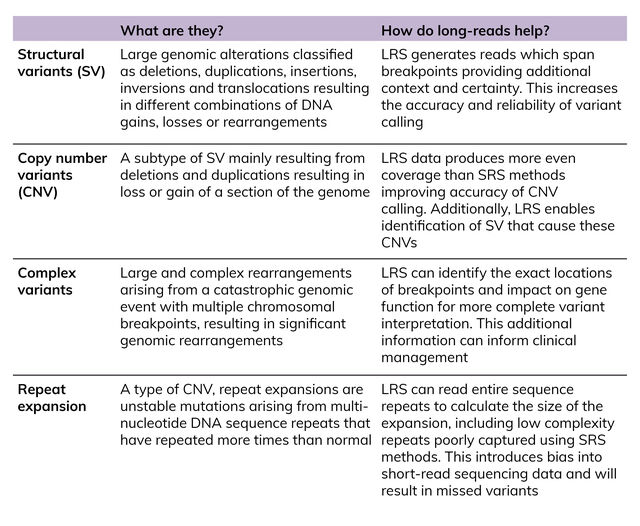 Table 2. Types of regions within the genome where short read sequencing has had more limited utility and examples of diseases where long reads could improve variant detection. 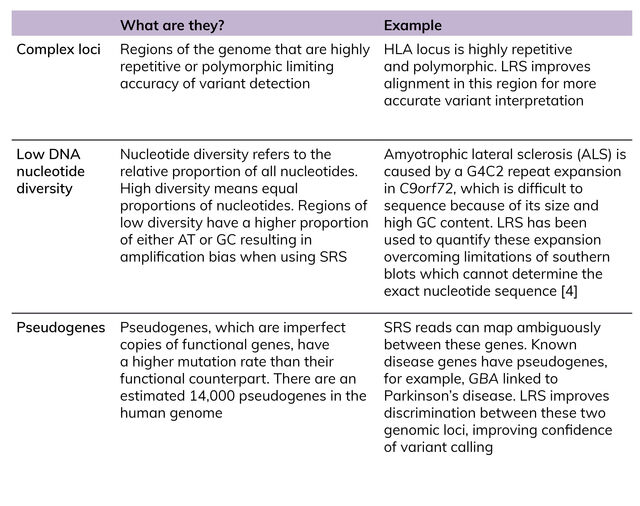 Variant detection becomes more challenging the greater the difference between an individual and the reference sequence. The current reference is a composite, made from the genomes of 20 individuals with a single individual contributing most of this sequence. LRS is now being used as part of efforts to develop a pangenome – a more sophisticated and complete reference representative of global genomic diversity. This, pangenome, has the potential to improve genome assembly across populations resulting in improved variant identification.

Genomic resources (i.e. genetic variant databases) are an essential component of genomic analysis to compare variants and inform their role in disease. LRS is now being used to expand the types of variants called in established cohorts (i.e. the 1000 Genomes Project, UK Biobank and deCODE) [5].

Most major genomic research databases are biased towards European populations, and cohorts more representative of global populations are needed. Improvements in these resources will improve diagnostic yields in clinical genomics by improving variant prioritisation and interpretation.

There is significant interest in the use of ‘omics to complement the genomics landscape - that is, fields such as proteomics, metabolomics, metagenomics and transcriptomics. ‘Omics have been proposed for a wide range of applications, but so far implementation has been limited. LRS has inherent advantages for ‘omics approaches over SRS approaches.

LRS incorporates identification of some DNA modifications into base calling algorithms enabling simultaneous detection of methylation abnormalities alongside sequence data. This data could also be used to provide functional evidence when interpreting variants. For example, more than 50 epigenomic signatures have been associated with rare diseases and this could be used as evidence for variant interpretation [6].

Transcriptomics is the study of all RNA within a sample made up of individual RNA sequences, known as transcripts. Most research focuses on messenger RNA (mRNA) which is used by the cell for transcription to produce proteins. One gene may code for multiple different mRNAs, known as isoforms. LRS can sequence complete mRNA sequences and this method has been useful in research to expand our knowledge of different isoforms from genes.

Transcriptomics has been implemented in clinical genomics, for example, to detect fusion proteins – chimeric proteins created from the joining of two or more genes that originally coded for separate proteins - sensitive to targeted cancer therapies. However, SRS has limited sensitivity in comparison to LRS for detecting novel transcripts and fusion proteins.

Is LRS ready for use in clinical genomics?

It is only recently that LRS data quality has been considered sufficient for use in clinical genomics. LRS technologies have limitations compared to SRS that need to be addressed, including lower throughput and higher costs compared to SRS. In addition, tools and resources are still being developed to enable LRS data to be analysed more effectively.
In practice, SRS has been used successfully to improve clinical outcomes and LRS is unlikely to replace these tests. Rather, LRS should be considered to complement existing SRS and other genetic testing services.

In clinical genomics, sequencing has become central to many services enabling a wide range of tests. Limitations of short-reads has increased interest in the use of technologies that enable long-read sequencing. Longer-reads have inherent advantages for variant detection and these technologies also have the potential to unlock ‘omics. There have been significant improvements in LRS technologies, although limitations remain, suggesting that it is time for clinical genomics to critically consider if these technologies may provide additional value to their services.

We thank the WYNG Foundation for generously supporting this work.

Views expressed in these documents do not necessarily reflect those of the WYNG Foundation.